Home | Blog | Why I Perform Breast Augmentation & Lift Together

Why I Perform Breast Augmentation & Lift Together Often, when a patient comes in seeking a breast augmentation at our Louisville, Kentucky practice, the discussion needs to shift a bit after I perform her initial examination. This is because, for many women, an augmentation on its own won’t produce the desired result, and I recommend adding a breast lift (mastopexy) for the best outcome.

Some women have stretched breast skin; others have nipples that point downward or breasts that have begun to sag and droop. This can happen after having children, losing or gaining a significant amount of weight, entering menopause, or other life events. But regardless of the cause, placing an implant in a sagging or droopy breast is never a good idea.

Instead, it’s best to first lift the breasts to a higher position and remove excess skin, which gives the breasts the ability to properly support the addition of implants. 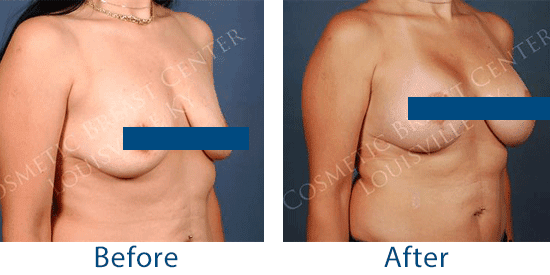 For these women, I develop a surgical plan that includes both an augmentation and a breast lift in a single procedure. The goal of a breast lift is to reshape and reposition the existing breast tissue, along with the nipple/areola, so that they sit at a higher placement on the chest and regain a youthful appearance. You might say it takes a droopy breast and makes it “perky.”

In this way, I differ from many surgeons, who prefer to do a staged procedure — i.e., completing the breast lift, allowing the result to heal, and performing a second surgery for the augmentation in 6 months to a year. In the interview video below, I talk about who needs a breast lift and why I prefer combining the lift with breast augmentation.

My main motivation for combining procedures is simple: Patients prefer 1 surgery over 2 because of the time commitment and the healing process. The preparations beforehand, the downtime, the gradual return to normal activities — in my opinion, that’s a lot to ask patients to go through twice.

Moreover, surgery is surgery, and every procedure carries with it a (very small) risk of complications that can develop during the operation and the healing process. For this reason, performing everything at once is simply a safer bet. It’s also cheaper, because many of the fees associated with undergoing surgery — such as use of the operating room and anesthetic — would double if the procedures were staged in 2 separate surgeries.

Overall, about half of all the breast enhancement procedures I perform involve a breast lift, whether on its own or in combination with a breast augmentation. I say this because I think many women are unaware of how common sagging or droopy breast tissue is — and given that it is fairly common, women who undergo a breast augmentation increasingly pair it with a lift for the optimal results.

Brazilian Butt Lift 101: Everything You Need to Know

Sometimes exercise and diet alone aren’t enough to shape and contour your body. If you want a permanent way to… Read More

Is a Mini Tummy Tuck Ever Worth It?

If you’re looking into a tummy tuck (abdominoplasty) at our Louisville, KY, plastic surgery practice, you’ve likely come across the… Read More

4 Questions to Ask at Your Breast Augmentation Consultation

Patients always have a one-on-one consultation before any plastic surgery procedure. For our breast augmentation patients in the Lexington and… Read More