Article Credit: Holly Houston,Admittedly, HOTG doesn’t venture to the East End often, but when I do it’s for a good cause, this time for “CaloSpa®‘s Annual Winning Looks Derby Event” last week to support fellow GLOW member Carrie Smith, CaloSpa®‘s client relations maven, and Clodhoppers, Kelly and Kathy’s boutique they grew from selling “grunge” shoes in the 90’s, i.e., Dr. Martens and Mary Janes, to a one stop glam shop at the historic Vogue in St. Matthews. I still have my oxblood loafers and Nirvana on my ipod but can my skin go back to what it was in the days of flannels and lattes?

Cher, (the one in your Bob Mackie black dress with the feathers so perfect for a Derby gala) can you really turn back time?

CaloSpa®‘s menu is a beauty junkies dream come true. From fillers to lifts and everything in between and sitting on the edge of Lime Kiln Lane, the space is as modern as the services it offers to polish and perk up what nature intended but may have neglected a bit lately.

After getting coiffed and made up, Madam Foo Foo herself fitted two of her exquisite Couture pieces atop my tightly pinned noggin so I could strut my stuff with the other volunteers representing Rodes, Blink, Blush and Sunny Daize, among others. Madam Foo Foo, by the way, doesn’t mess around.

My futuristic fascinator, one of her favorites, made me feel like Lady Gaga and Kate Middleton all rolled into one, not an easy task, to be sure, but one I could take on with a little help from the good doctors should I go that way, Dr. Bradley Calobrace and Dr. Nana Mizuguchi. The evening benefited the Backside Learning Center at Churchill Downs. Wiltshire Pantry Catered. Fabulosity, as always with this crowd, reigned. 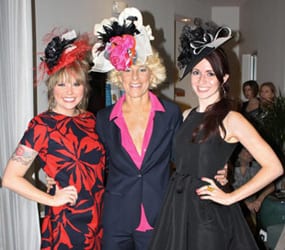 Lisa Meredith Featured in the Voice-Tribune

Our very own Lisa Meredith, Certified Surgical First Assistant (CSFA), was featured in the Voice-Tribune recently! Lisa has been part… Read More

CaloAesthetics® plastic surgery practice in Louisville, KY is proud to be one of the first practices in the country to… Read More